We need your help to make a difference in Wake County! 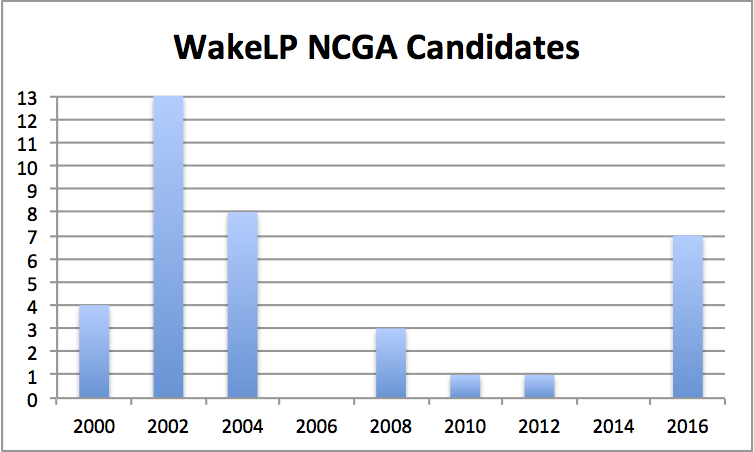 In 2016, the LPNC ran seven candidates for North Carolina General Assembly (“NCGA”) seats in Wake County, the most in over a decade—and three of them “beat the spread” by garnering more votes than the difference between their two establishment party opponents. The most expensive NC House race in North Carolina was in Wake County—between them incumbent Republican Gary Pendleton and Democratic challenger Cynthia Ball spent over $1 million—and Libertarian David Ulmer, who spent $5 thousand, got nearly three times as many votes as the difference between the two establishment party candidates.

This is the sort of performance that commands attention from establishment party politicians and their campaign managers…not to mention the media and voters. We are building a libertarian constituency in Wake County and establishment party candidates who ignore our issues are increasingly at risk of defeat. Gen. Pendleton and his donors wasted $500k on a losing campaign, arguably because he failed to do enough to appeal to the folks who voted for Mr. Ulmer…certainly there were way more than enough of them to have turned the tide.

We learned a lot in 2016 about running effective campaigns: which events are worth the time, how to recruit and manage volunteers, utilizing social media to get the biggest bang for the buck, who in the press corps we can count on for a fair shake, why video is king even if you can’t afford TV ads, and much, much more. Our plan for 2018 is to leverage the cadre of experienced candidates and staff that we have to significantly expand our efforts—more candidates, more press coverage, more fundraising, more votes, more influence.

To get the maximum bang for our buck out of limited financial and staff resources, we have designed the WakeLP Candidate Acceleration Program (”CAP”). CAP will enable us to support each of our NCGA candidates—and we are planning for significantly more than seven in 2018—with a professional grade web site, Facebook page, Twitter account, e-mail accounts, business cards, standard designs for yard signs and other campaign materials, a treasurer to manage financial reporting, centrally-coordinated volunteer services, and database support.

Of course, to develop CAP requires an investment of financial and sweat equity…and that’s where we need your help!

We need $4000 by 1 March 2018 to pull this off. That level of funding would enable up to a dozen Libertarian NCGA candidates to hit the ground running…and if all goes according to the master plan, it’s just the start. We will be mobilizing our volunteers to canvas heavily in at least a couple of key competitive districts where we have the opportunity to beat the spread, and helping those candidates with strategy, operations, and their own fundraising.

Between the coordinated, harmonious chorus all our campaigns will generate and the crescendos of solo turns our candidates will produce in two or three key 2018 races, we aim to make the loudest libertarian noise ever in Wake County—and have the most impact on the results. (And this is just a warmup for 2020!)

But it all depends on having those funds available before our candidates file to run early next year. So please…be a part of helping rock the establishment parties and promote libertarian policies right here in Wake County in 2018!