Raleigh, 5 January 2018—Final 2017 voter registration numbers are in, and for the tenth consecutive year, the fastest-growing political party in Wake County are the Libertarians:

Since regaining ballot access in 2008, the WakeLP (10 out of 10 years) have grown faster than average every year, while WakeDems (1 for 10) and WakeGOP (0 for 10) have generally failed to keep pace with the overall growth of the voting population. The number of independent (officially, “unaffiliated”) voters also consistently increased faster than average during that time span (10 for 10).

“It’s clear that many voters in Wake County are not happy with the two establishment parties,” stated WakeLP Chair, David Ulmer. “And no wonder, given that the General Assembly produces more partisan bickering and court suits than solutions to the problems facing North Carolina citizens.”

“And it’s not just the registration numbers,” added WakeLP Vice Chair, Bruce Basson. “We raised more money in 2016 than in all previous years combined going back to the founding of the party in 1992. And we raised more money in just the fourth quarter of 2017 than all of 2016. During 2017 overall, we more than doubled our 2016 donations and set a new all-time Libertarian county affiliate party fundraising record for North Carolina. And the total number of donors and volunteers also set all-time highs.”

The year directly following a Presidential election year usually sees a decline in registered voters as the Board of Elections purges voters who have been inactive for several years…and indeed, Wake County bucked the overall trend as every party—and independents—did better here in 2017 than in the state overall:

“It’s a long-term effect,” commented Ulmer. “25 years ago, barely one of every ten voters in North Carolina was independent…today better than one of every three voters here are. And it appears to be speeding up. We watch the numbers closely and most months, an outright majority of new registrations by millennials and younger choose to be independent. Overall, since 1993 the number of registered independents in North Carolina has increased an average of 8.7% every single year. Wish my retirement fund would grow that fast…8.7% growth beats the stock market returns over the last 25 years by more than a point per year.” 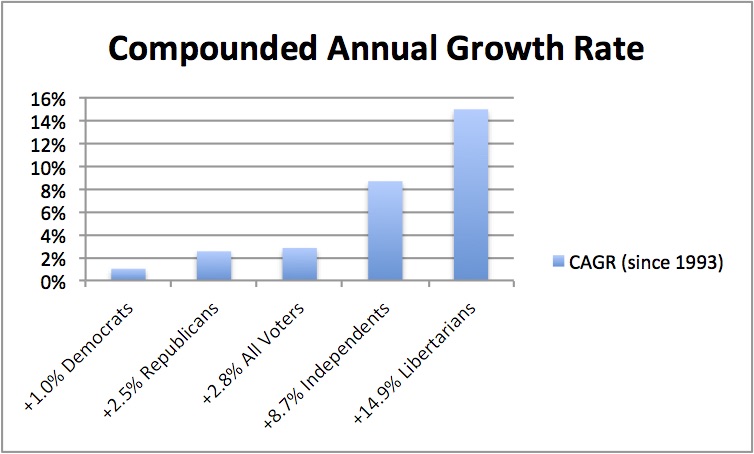