Here are some key excerpts from his report:

This was not only a new all-time high for any LPNC county affiliate, but it was also more money than several state Libertarian parties raised. Of course, the dollar figures are still significantly smaller than those of the establishment parties. Wake Democrats and Republicans both outraised us 10:1. In other words, they raised $10 for every dollar we did. But that’s an improvement. In 2016, the ratio was 74:1.

If you look at it another way, dollars raised per registered voter, we’re doing very well, as this chart shows. 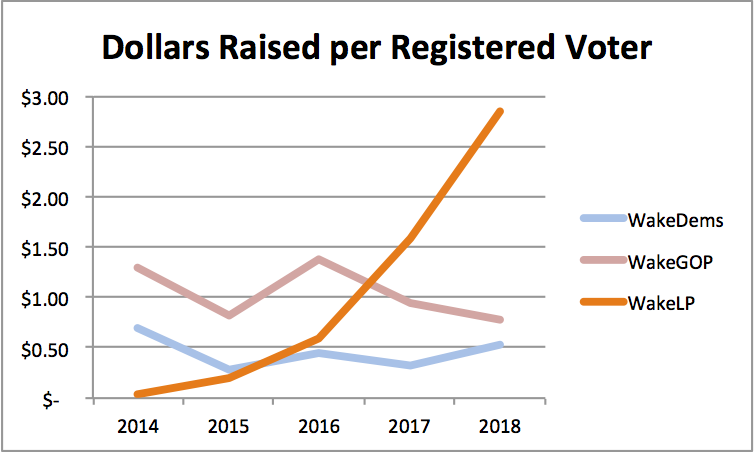 And we know we can do even better.

Our candidates invariably draw many votes from Democrats, Republicans, and independents, so we should be able to tap some of those folks for financial support, too. If we can reach more of those supporters we ought to be able to collect $3 to $6 or higher per registered Libertarian … say $15k to $30k.

We’ve done it before. Our previous high dollar mark was 2002 when we raised $11,100. With only 1,130 registered Libertarians in Wake County back then, that amounted to $9.80 per Libertarian.

Match that level of effort today and we’re talking $50k!

Libertarians on the Rise

Not only is our fundraising on the rise, so are our numbers. In 2018 we had:

• Most ever registered Libertarians in Wake County (5,124 at year end)

• Most ever votes for a Libertarian candidate in Wake County (19,710 for Michael Monaco)

Our Facebook page ended 2018 with the most likes ever, our Twitter account had the most followers ever, our speaker events had the largest average attendance ever, our monthly newsletter grew to a record 900+ subscribers.

More Libertarians. For the 11th year in a row, WakeLP grew faster (13.2%) than not only the establishment parties (Democrats 4.1%, Republicans 1%) but outstripped the growth of independents (8.4%). (We weren’t the fastest-growing party this year because both the Greens and Constitutionalists, starting from zero, experienced infinite growth in 2018.)

More Candidates & Votes. It wasn’t just that we ran more candidates than ever before. Our capability to recruit, train, and support candidates grew substantially in 2018. Every candidate had professional headshots, a website, a Facebook page, business cards, and a name tag. Several had hangers and yard signs, all using common designs to increase the collective visibility of all of our candidates. 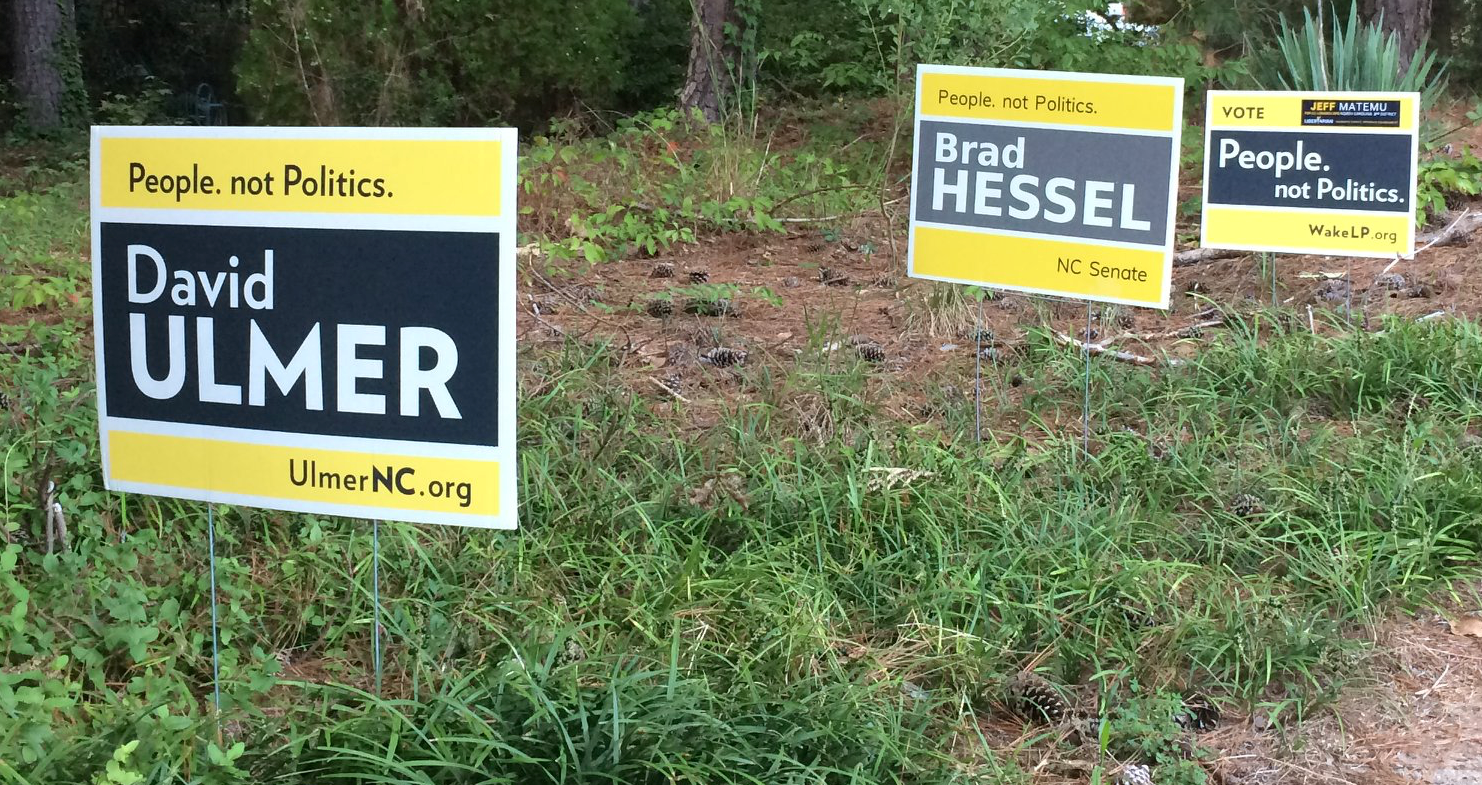 We recruited and deployed a crack support team of volunteers with management, graphic design, social media and online advertising, database and data wrangling, and canvassing skills to support our candidates. For those who didn’t have their own, we recruited treasurers to handle the campaign finance reporting requirements.

We conducted two days of candidate training. All the candidates focused on three main issues: education, the economy, and health care. We spent a considerable portion of our bankroll on highly targeted online advertising promoting our candidates, their events, and their videos.

(We also learned a lot which means probably also set a new record for mistakes in 2018 But it’s all good. Incorporating the lessons learned, we’ll be even more effective in 2020 and beyond!)

How We Spent Last Summer (and Spring, and Fall) 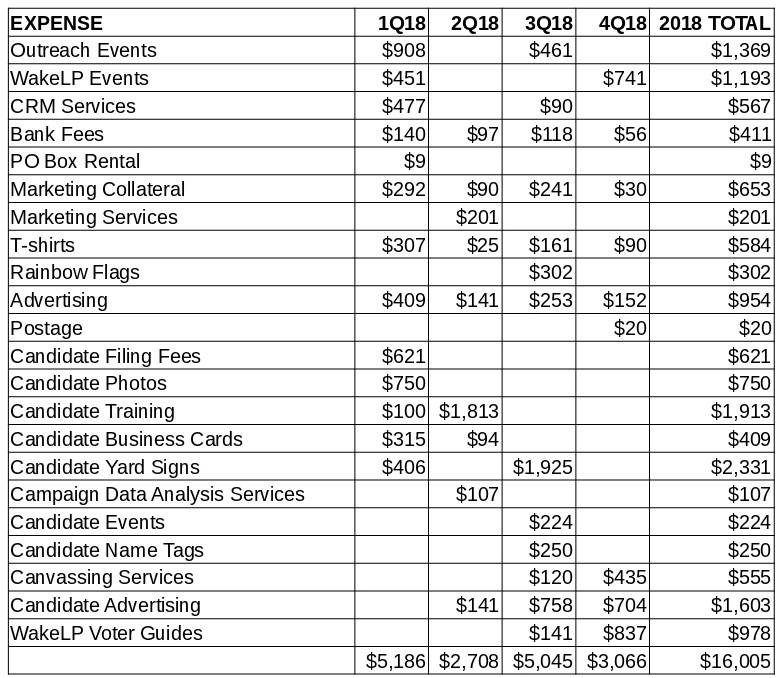 Looking Ahead – With Your Continued Support

There are many Wake and North Carolina issues on the table in 2019, and we are eager to push the discussion in a libertarian direction.

In 2019, we want to champion allowing property owners to build granny flats and contract with AirBnB, eliminating ABC stores, fighting the over-regulation of scooters, eliminating unnecessary licensing and certification requirements for sole proprietors and small businesses…and many more issues.

But boosting the signal enough to be heard takes money. Please help WakeLP focus and broadcast the voice of all lovers of liberty here in Wake County on these issues.

Remember that your life is affected more by decisions made in your home town and in the N.C. General Assembly than by any made in Washington DC.

Your contribution to WakeLP helps ensure that all the citizens of Wake County see libertarian alternatives to business-as-usual proposals to address those issues in 2019 and Libertarian candidates on their ballot in 2020!