In contrast, the number of Democrats declined seven percent, Republicans lost four percent, and even the number of “Unaffiliated” voters, the state's name for independents, was down one percent.

The percentage of voters registered as either Democrat or Republican fell to an all-time low of 66.58 percent. That continues a quarter-century decline from 91.87 percent back in 1993.

This was the slowest annual growth rate recorded for the LPNC in that period. (The number of registered Libertarians has never declined year-over-year, except for the three years they were off the ballot.)

The declines can be attributed, at least partly, to the regular off-election year purge of inactive voters. But general dissatisfaction with establishment parties in evident in these figures.

Wake County reflects these statewide trends. Total voter registration in the county was down one percent, while the number of registered Libertarians surged five percent to an all-time high of 5,405. Republicans declined four percent, Democrats were down two percent, while independents edged up two percent.

Underlining the growing dissatisfaction with the establishment parties, in March the number of independent voters in Wake surpassed the number of registered Democrats to become the largest voter block in the county. Statewide, the Democrats are still #1 but at the rate things are going, independents could overtake them as soon as next year. 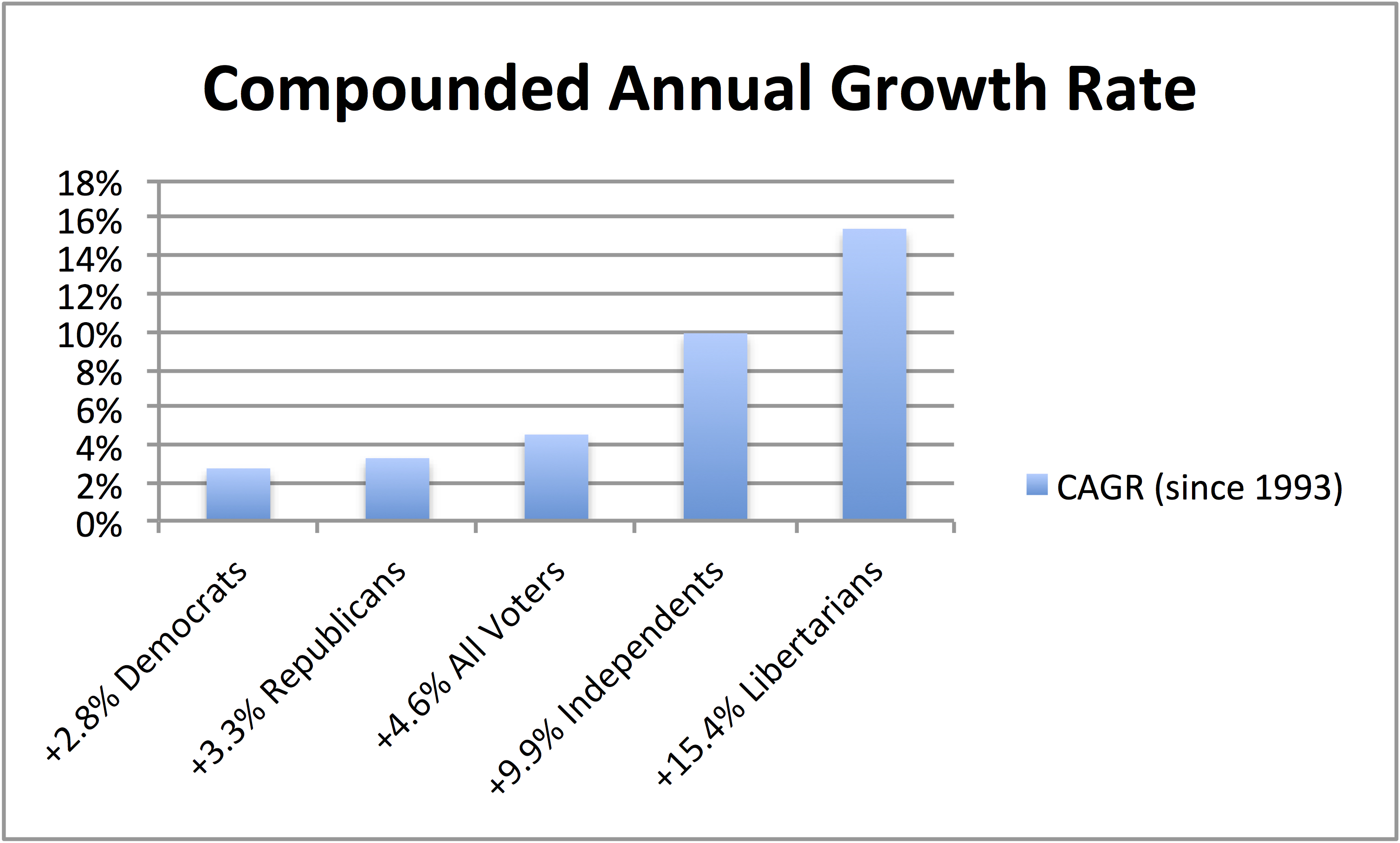 Our state’s two newer parties, the Green and Constitution, bucked this trend. Statewide Green registration was up 90 percent in 2010 to 1,938. The Constitutionalists did even better, up 217 percent to 2,786. The Greens, who had a head start in 2018, started 2019 ahead of the Constitutionalists, but are now decidedly eating their dust.

Looking at the entire quarter-century, the LPNC continues to lead the pack with a robust compounded annual growth rate of 14 percent compared to 8 percent for Unaffiliateds, 2 percent for Republicans, and 1 percent for Democrats. If you were investing your retirement money, you would definitely prefer a fund that paid out 14 percent per year to one that paid out 2 percent or 1 percent!

WakeLP is growing even faster than the state party, with a CAGR of 15 percent. This compares to 10 percent for independents, and 3 percent each for Republicans and Democrats.

The establishment parties consistently fail to keep pace with the overall three percent annual growth rate in voters. Democrats have grown slower (or declined faster) than the overall number of voters 25 out of the last 26 years. They only beat that in 2008, thanks to Barack Obama. Republicans beat the average 11 times. But their last win was in 2004. They are currently on a 15-year losing streak.

Voters will benefit from this growth in November. Every state voter will be able to choose three Libertarian candidates – president, governor, and U.S. Senate. Wake voters will have at least four, and most will have five or six.

Hopefully, that will help fuel even higher growth numbers going into 2021.